Margaret Baskett
James Franklin Baskett was an American actor and singer, known for his portrayal of Uncle Remus in the 1946 Disney animated feature film, Song of the South. In addition to Uncle Remus, he supplied the voice of Br'er Fox and some lines for Br'er Rabbit in Song of the South. He first worked for Disney in an uncredited part in Dumbo, voicing Fats Crow.

Born in 1904 in Indianapolis, Indiana; Baskett moved to Hollywood where he got his first supporting role in the film, Harlem is Heaven. He also became known for his portrayal of the radio role "Gabby Gibson" on The Amos 'n' Andy Show. His other film credits include 20,000 Cheers for the Chain Gang, Gone Harlem, Policy Man, Straight to Heaven, Comes Midnight, Revenge of the Zombies, The Heavenly Body, and Jungle Queen.

In 1946, he auditioned for a bit part voicing one of the animals in Song of the South, based on the Uncle Remus stories by Joel Chandler Harris. Walt Disney was impressed with Baskett's talent and hired him on the spot for the lead role of Uncle Remus. He was also given the voice role of Brer Fox, one of the film's animated antagonists, and also filled in as the main animated protagonist, Brer Rabbit, in one sequence. This was one of the first Hollywood portrayals of a black actor as a non-comic character in a leading role in a film meant for general audiences. In recognition of his warm portrayal of the famous black storyteller he was given an Academy Honorary Award, making him the first black male performer to receive an Oscar.

Baskett had been in poor health during the filming of Song of the South, due to diabetes and he suffered a heart attack in 1946 shortly after the film's release. His health continued to decline, and on July 9, 1948; Baskett died of heart failure resulting from diabetes. He was survived by his wife, Margaret, and his mother, Elizabeth. He is buried at Crown Hill Cemetery in Indianapolis, the same place where fellow Disney actor Bill Shirley (Sleeping Beauty) was laid to rest.

Uncle Remus
(Song of the South)

Br'er Fox
(Song of the South) 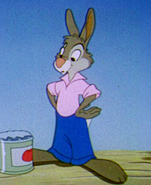 Br'er Rabbit
(Song of the South, in the "Laughing Place" segment)