With Hamilton:
Josephine Archer Cameron
With Amis:
Quinn Cameron
Elizabeth Rose Cameron
Claire Cameron
James Francis Cameron is a Canadian film director, film producer, deep-sea explorer, screenwriter, visual artist, and editor, who is best known for directing numerous famous science-fiction films. Some of his best known films include The Terminator, Aliens, The Abyss, Terminator 2: Judgment Day, True Lies, and two of the highest grossing films of all time: Titanic (which won the Academy Award for Best Picture and the Academy Award for Best Director and Best Film Editing for him) and Avatar.

For Disney, he directed Ghosts of the Abyss and Aliens of the Deep. His Academy Award-winning film, Avatar, will become a themed area at Disney's Animal Kingdom at the Walt Disney World in Orlando, Florida. He also produced Terminator: Dark Fate, and has written and is set to direct Avatar 2 and its sequels.

James Cameron poses at his Hollywood Walk of Fame ceremony in December 2009.

James Cameron at the 3D re-release premiere of Titanic' in March 2012. 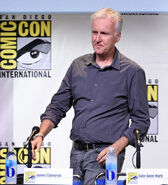 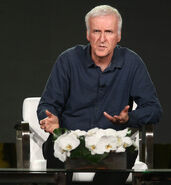 James Cameron speaks at the AMC Visionaries panel at the 2018 Winter TCA Tour.
Add a photo to this gallery
Retrieved from "https://disney.fandom.com/wiki/James_Cameron?oldid=4191815"
Community content is available under CC-BY-SA unless otherwise noted.