Max, Carey and Charlotte
James Kimberley Corden, OBE is an English stage, television, and film actor, comedian, television comedy writer, producer, and presenter, who is best known for his television role as Neil "Smithy" Smith on the BBC sitcom Gavin & Stacey from 2007 to 2010, which he also co-created and co-wrote. He also voiced Biggie from the 2016 DreamWorks film, Trolls and its 2020 sequel, Hi-5 from the Sony Pictures Animation film, The Emoji Movie, and Peter Rabbit from the 2018 film of the same title and its 2021 sequel.

For Disney, he portrayed the The Baker in the 2014 Disney live-action fantasy musical film, Into the Woods.

He was supposed to have a role in Ralph Breaks the Internet, but for unknown reasons, he never did.

The Baker
(Into the Woods) 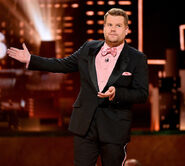