3
James Oliver Cromwell is an American actor. He is well-known for playing Arthur Hoggett in the 1995 film, Babe in which he was nominated for an Academy Award for Best Supporting Actor. He also voiced the Colonel in the 2002 DreamWorks animated film, Spirit: Stallion of the Cimarron.

For Disney, he voiced Robert Callaghan in the 2014 Disney animated feature film, Big Hero 6 and it's subsequent TV series. He also played Charlie "the Robber" Mulvihill in the 1994 remake of The Shaggy Dog, Dr. Lionel Canter in Surrogates, Admiral Rothman in The Rescue, and Ogden Phipps in Secretariat. 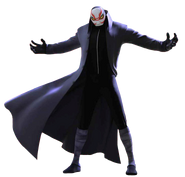 James Cromwell at the premier of Secretariat in September 2010.

James Cromwell behind the scenes of Big Hero 6.

James Cromwell and his wife, Anna Stuart attending the 73rd Venice Film Fest in September 2016.
Add a photo to this gallery
Retrieved from "https://disney.fandom.com/wiki/James_Cromwell?oldid=3939536"
Community content is available under CC-BY-SA unless otherwise noted.