Kim and Gigi
James Scott Bumgarner, known professionally as James Garner, was an American actor, voice actor, and producer, known for his distinctive gravelly voice. For Disney, he played Corporal Clint Keyes in One Little Indian, Lincoln Costain in The Castaway Cowboy, Jeff Johnson in The Distinguished Gentleman, Jim Egan in 8 Simple Rules, and provided the voice of Lyle Tiberius Rourke in Atlantis: The Lost Empire.

Garner was born on April 7, 1928 in Denver, Oklahoma and fought in World War II before enrolling Hollywood High School but dropped out in his senior year. In 1954, Garner staring acting and, within a few years, he gained his first leading role on television with Maverick. His other appearances on shows include Cheyenne, The Rockford Files, God, The Devil and Bob, First Monday, and 8 Simple Rules.

In film, Garner appeared in both leading and supporting roles for films such as Sayonara, The Children's Hour, The Wheeler Dealers, The Great Escape, The Americanization of Emily, Grand Prix, Marlowe, Support Your Local Sheriff!, Support Your Local Gunfighter, Victor/Victoria, Murphy's Romance, Space Cowboys, and The Notebook. He also appear in television film and miniseries' where received acclaim and award recognition such as Promise, My Name is Bill W., Decoration Day, Barbarians at the Gate, and Breathing Lessons.

On November 1, 2011, Simon & Schuster published Garner's autobiography The Garner Files: A Memoir which detailed his troubled childhood and his rise to fame. On July 19, 2014, Garner was found dead at his Los Angeles home after suffering a heart attack caused by coronary artery disease. 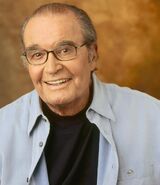 Jim Egan
(8 Simple Rules)
Add a photo to this gallery

James Garner in the late 50's.
Add a photo to this gallery

Retrieved from "https://disney.fandom.com/wiki/James_Garner?oldid=4490379"
Community content is available under CC-BY-SA unless otherwise noted.