Jack, Mary, and William
James Paul Marsden is an American actor, singer, and former Versace model who is best known for his role as Cyclops in the first three X-Men films and also his cameo appearance in X-Men: Days of Future Past and Diggs in Cats and Dogs: The Revenge of Kitty Galore. He also played Fred O'Hare in the Universal/Illumination's 2011 Live-Action/Animated hybrid film, Hop. He also played Tom Wachowski in the 2020 film, Sonic the Hedgehog.

For Disney, he played Prince Edward in Disney's 2007 fantasy romantic comedy musical film, Enchanted. In 2014, he voiced Sir Brad Starlight in the Wander Over Yonder episode "The Hero."

James Marsden at premiere of Enchanted in November 2007.

James Marsden speaks at the World Premiere of Robot and Frank in January 2012. 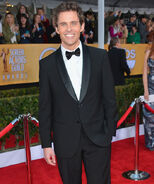 James Marsden speaks at the Westworld panel at the 2016 Summer TCA Tour. 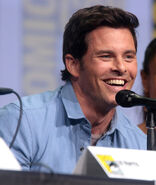 James Marsden and Ben Schwartz attending the 2019 CinamaCon.
Add a photo to this gallery

Retrieved from "https://disney.fandom.com/wiki/James_Marsden?oldid=4109344"
Community content is available under CC-BY-SA unless otherwise noted.