For Disney, he played Tumnus in the 2005 Disney and Walden Media fantasy film, The Chronicles of Narnia: The Lion, the Witch and the Wardrobe, and Gnomeo in the 2011 Touchstone Pictures film, Gnomeo & Juliet. He also makes a cameo appearance as a UPS delivery person in the 2014 Disney musical comedy film, Muppets Most Wanted. He even played Kevin Wendell Crumb/The Beast in Glass, Tom Lefroy in Becoming Jane, and Professor Charles Xavier in Dark Phoenix.

Mr. Tumnus
(The Chronicles of Narnia: The Lion, the Witch and the Wardrobe)

Professor X
(Dark Phoenix)
Add a photo to this gallery 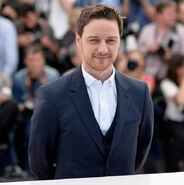 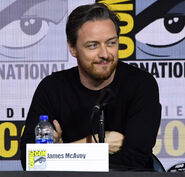 James McAvoy attending the 2019 San Diego Comic Con.
Add a photo to this gallery
Retrieved from "https://disney.fandom.com/wiki/James_McAvoy?oldid=4021196"
Community content is available under CC-BY-SA unless otherwise noted.