Bryan Greenberg (2015-present)
Jamie Jilynn Chung is a Korean-American actress and former television personality who first gained fame in 2004 as a cast member on the MTV reality series The Real World: San Diego and subsequently through her appearances on its spin-off show, Real World/Road Rules Challenge: The Inferno II. She eventually transitioned into acting and has since become known for her roles in films, such as Sorority Row, The Hangover Part II, and Sucker Punch and having been the series lead in the ABC Family television miniseries Samurai Girl.

For Disney, she voiced Go Go Tomago in the 2014 Disney animated feature film, Big Hero 6 and reprised the role again in the television series of the same name, and the video game, Kingdom Hearts III. She also portrayed Mulan in the ABC fantasy-drama series, Once Upon a Time, Sienna and The Tri Pi Sister in the ABC Family TV show, Greek, Trina Paiz in the ABC TV show, Grey's Anatomy, Romy Lee in the ABC TV show, Castle, and Chelsea Barnes in the 2009 Disney Channel Original Movie, Princess Protection Program. 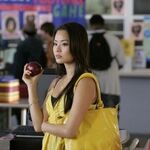 Mulan
(Once Upon a Time)

Jamie Chung behind the scenes of Big Hero 6.

Jamie Chung at premiere of Big Hero 6 in October 2014.

Jamie Chung and Elizabeth Banks at premiere of Resident Advisors in March 2015.

Jamie Chung speaks at The Gifted panel at the 2017 Summer TCA Tour.

Jamie Chung takes an image of the audience, during the 2018 San Diego Comic Con.
Add a photo to this gallery
Retrieved from "https://disney.fandom.com/wiki/Jamie_Chung?oldid=4075594"
Community content is available under CC-BY-SA unless otherwise noted.