1989–present
James Harvey "Jamie" Kennedy is an American stand-up comedian, TV producer, screenwriter, and actor, best known for his role as Randy Meeks in the Scream franchise, and Bradley "B-Rad" Gluckman in the 2003 comedy Malibu's Most Wanted.

For Disney, he played the Evil Ice Cream Man in Max Keeble's Big Move and Sergeant Peter Bello in Ad Astra, and also voiced Helios in the Star vs. the Forces of Evil episode "Royal Pain". 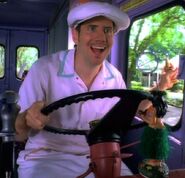 Helios
(Star vs. the Forces of Evil)
Add a photo to this gallery

Jamie Kennedy speaks at the Heartbeat panel at the 2016 Winter TCA Tour.
Add a photo to this gallery
Retrieved from "https://disney.fandom.com/wiki/Jamie_Kennedy?oldid=4071439"
Community content is available under CC-BY-SA unless otherwise noted.