Dash
Ellen Jane Carr is an English actress and voice actress who is best known for voicing the Lady Pillingston and Pudin in the Cartoon Network animated series The Grim Adventures of Billy & Mandy and Mama Cosma in the Nickelodeon animated series The Fairly OddParents.

For Disney, she played Myra in the Walt Disney's Wonderful World of Color episode "The Return of the Shaggy Dog", a maid in You Lucky Dog, Lucinda in the 2009 film, Hannah Montana: The Movie, and a hotel guest in Wizards of Waverly Place. She also voiced Mrs. Dunwitty in the 2002 Disney animated feature film, Treasure Planet, Nanny Nane in the Disney Channel animated series Kim Possible, Winifred Fletcher in Phineas and Ferb, Mrs. Bertram in Boy Meets World, Kitty in Coop & Cami Ask the World, and Dan and Ann Chovie in Fish Hooks.

She also voiced Fairy Godmother in some theme park attractions.

Carr also has a prominent stage career where she received a Laurence Olivier Award nomination in 1977 for her performance as Mary Mooney in the comedy Once a Catholic. She also appeared in shows, like A Midsummer Night's Dream, The Tempest, As You Like It, Much Ado About Nothing, The Merchant of Venice, The Merry Wives of Windsor, Peter Pan, The Way of the World, The Life and Adventures of Nicholas Nickleby, Disney's stage adaptation Mary Poppins, and A Gentleman's Guide to Love and Murder. 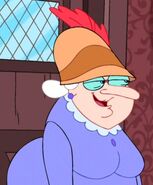