Lara Embry (2010-2014)
Jane Marie Lynch is an American actress, voice actress, comedian, singer, and author, who is best known for her Emmy award-winning role as Sue Sylvester in the Fox musical comedy-drama series Glee from 2009 to 2015 and for being the host of the game show, Hollywood Game Night since 2013.

For Disney, she voiced Sergeant Calhoun in the 2012 Disney animated feature film, Wreck-It Ralph and its 2018 sequel, Ralph Breaks the Internet. She also voiced Mrs. Johnson in three episodes of the Disney Channel animated series Phineas and Ferb, Jackie Greenway in Handy Manny, Queen Neptuna in the Toy Story Toons episode Small Fry, and Mrs. Locks in Goldie and Bear.

According a November 2010 post by Thewrap.com, Lynch was to appear in the film, The Muppets as a prison guard. Lynch denied the rumor in a red-carpet interview with MaximoTV.com, but stated that she would enjoy doing so if offered. She also appeared in Girl Meets World as herself, Desperate Housewives as Maxine Bennett, Felicity as Professor Carnes, MDs as Aileen Poole, According to Jim as Janice, Monk as Dr. Julie Waterford, Criminal Minds as Dr. Diana Reid. In addition, she appeared in the ABC TV show, The Real O'Neals. In addition, she provided the voice of Supersonic Sue in Big Hero 6: The Series.[1]

Jane Lynch behind the scenes of Wreck-It Ralph.

Jane Lynch at the premiere of Wreck-It Ralph in October 2012. 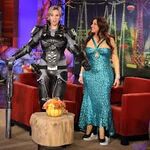 Jane Lynch speaks at the Angel From Hell panel at the 2015 Summer TCA Tour.

Jane Lynch at the premiere of Ralph Breaks the Internet in November 2018.