Help the Confederacy of Independent Systems

Decapitated violently by Mace Windu with his lightsaber on Geonosis

"Don't move, Jedi!"
"I'm just a simple man, trying to make my way in the universe."
Jango Fett is a character in the Star Wars universe. He first appeared as the secondary antagonist in Star Wars: Attack of the Clones.

Jango was a bounty hunter who worked for Separatist leader Count Dooku, who had hired him to kill Senator Padmè Amidala. He hired another bounty hunter, Zam Wesell, to kill her. After failed attempts on Coruscant, Jango shot her with a poison dart, killing her. Jedi Knight Obi-Wan Kenobi tracked him to Kamino, where he found that he had a son named Boba and was a genetic template for a clone army. After trying to arrest Jango, Obi-Wan was knocked down by Boba, who was piloting their ship the Slave I. They were followed by Kenobi through an asteroid field, where Boba realized the two were being tracked. After a fight, Obi-Wan faked his death and eventually landed on Geonosis, where Count Dooku was. Kenobi was captured and a failed rescue attempt by his padawan, Anakin Skywalker, and Amidala, resulted in all three being sentenced to death.

At the execution, the three broke free and killed the beasts that were supposed to kill them. A Jedi strike team, led by Mace Windu, arrived to rescue them. Eventually, Jango rocketed down and attacked the Jedi, resulting in Windu decapitating him.

Jango is an occasional character at the Jedi Training Academy show. He was also a meetable character during Star Wars Weekends at Walt Disney World in 2003, 2006, and 2010. 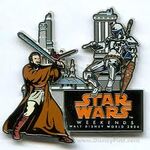 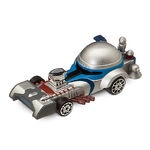 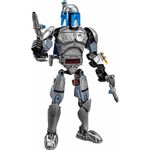 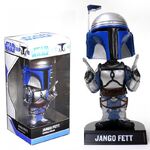 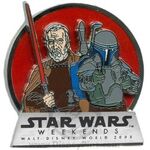 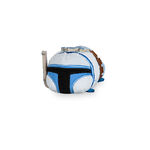 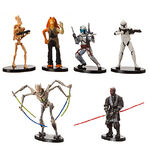 Retrieved from "https://disney.fandom.com/wiki/Jango_Fett?oldid=3639957"
Community content is available under CC-BY-SA unless otherwise noted.