Oppression, being dominated in a man's world

Janie Diggety (née Lilly) is a supporting character of the animated series Pepper Ann. She is the sister of Lydia Pearson and maternal aunt to Pepper Ann and Moose Pearson. She is a progressive feminist activist who always leaves an imprint for better, and sometimes worse, on her nieces.

Janie Diggety, born Janie Lilly, is the younger daughter of Leo and Lillian and younger sister to Lydia. She was supposed to be called Lanie, but her name was misspelled on her birth certificate. While she took part in her family's traveling entertainment business, she became a hippie and activist, following a stint as a Green Beret, and moved back to Hazelnut where she met JoJo Diggety. They got married and had a son named Nedward "Ned". They began to live in a duplex when a very pregnant Lydia arrived with Pepper Ann and they have lived together since.

Janie typically acts as Pepper Ann's go-to for being active in the community and will offer advice for her niece when asked. Among the things she has done include, protest the use of harmful chemicals in gardening, study the effects of video games, getting caught up in the Thanksgiving rush to buy yams and other peculiar things. While she teaches Pepper Ann things about activism, her niece in turn teaches her to be more down to earth. Despite her husband having the moral opposite job as a police officer, she loves him and their son dearly.

Janie and her family are absent in "The Finale", though it can be assumed that she still lives in the other half of the duplex.

Janie is and environmentalist and feminist who is constantly determined and active. She has a strong sense of justice and large amount of faith. However, she is also slightly giddy as she maintains a very upbeat and positive attitude and when she laughs, she lets out a very unusual hiccup sound. At times, it is implied that she is out of touch with modern culture as she sometimes need to be informed by Pepper Ann about certain things. Nevertheless, she loves her family dearly and does everything she can to be helpful.

Janie is a Caucasian of average height with amber hair that hangs over and glasses like her sister. She wears blue bead earrings, a crystal necklace, lime green tank top, dark green shorts and brown slip on shoes. 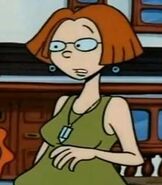