Jannah (formerly known as TZ-1719) is a supporting character introduced in The Rise of Skywalker. Like Finn, Jannah is a former First Order Stormtrooper who lived on Kef Bir after her defection. Upon meeting Finn and his comrades, Jannah and her group of other defected stormtroopers joined the Resistance in their fight against the Sith Eternal and Emperor Palpatine.

Taken from her family as a child by the First Order, Jannah, known as TZ-1719, was trained to be stormtrooper. While being groomed as a stormtrooper, TZ-1719 was trained in archery under the tutelage of Captain Phasma.

As a former stormtrooper for the First Order, Jannah has a sense of honor and justice. When ordered to kill a group of innocent civilians, Jannah refused and disgusted with the First Order's cruelty, defected from the remnants of the Galactic Empire.

Jannah meeting members of the Resistance.

Jannah surprised to hear Finn is a former stormtrooper like her. 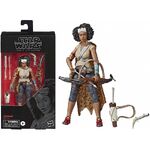