Peace, children, hanging out with Padme

Jar Jar Binks is a former Gungan military officer and a politician during the waning days of the Galactic Republic. His clumsy behavior had, at one point in his life, led to his exile from Gungan society, but he was welcomed back by his people following his efforts during the Trade Federation Invasion of Naboo. Jar Jar is best known for being the most polarizing character in the Star Wars franchise.

Jar Jar is clumsier and more incompetent than most of his fellow Gungans, which was the reason why he was banished from Otoh Gunga. He would often explain his dislike, sometimes by lashing out with his long tongue. Like all Gungans, he spoke with a peculiar Basic dialect, which sometimes made him hard to understand. Despite his clumsiness, Jar Jar used to be a keen dancer, and he is known to perform notably Deesco and the Gungan Style.

He often held a certain irreverence for his superiors - often making faces behind their backs, but he would still obey their orders. He is socially active, trying to communicate with sentients around him, and making new friends. He has some knowledge of mechanics, as he was able to perform maintenance on Anakin Skywalker's pod. As a diplomat, he helped unite the Gungans and the Naboo in 32 BBY. For that deed, he was promoted to general. He would lead the Gungan army against the battle droids, destroying many of them, even if sometimes by accident. In other adventures during the course of the Clone Wars, Jar Jar displayed hidden talents of intellect and improvisation despite his clumsiness and nervousness, contributing greatly to Republic victories on either diplomatic or special combat missions.

As a politician, Jar Jar successfully represented the Gungans for several years, but when he had to take the role of Senator, he was easily manipulated by Palpatine's cronies. However, his dedication to his friends made him a very reliable associate and ally, whether it be on a diplomatic or combat mission.

Jar Jar is first seen enjoying a snack in the meadow when a giant Trade Federation MTT tank bears down on him. Qui-Gon Jinn, who happens to be there, forces the terrified Gungan out of the way. In return for saving his life, Jar Jar becomes Qui-Gon's servant and aids him and his apprentice, Obi-Wan Kenobi, in their rescue of Naboo's queen, Padmé Amidala and, with Padmé and the Jedi, travel off-world to Tatooine. Jar Jar is forced to come with because Qui-Gon thinks his presence will lower suspicion, since there are many aliens on the planet. While they are there, Jar Jar also picks a fight with Sebulba. Jar Jar later accompanies Qui-Gon to Coruscant, where he sits in wait with Anakin. He goes to the Queen, and attempts to comfort her about the imminent death of the Naboo. Finally, they all return to liberate his planet from the Federation. Upon his return, Jar Jar helped to forge an alliance between the Gungans and the Naboo, ending years of mistrust.

For his efforts, he was promoted to Bombad General by Boss Rugor Nass and served in the Gungan Grand Army during the Battle for Naboo alongside Captain Tarpals. He later attended the funeral of Qui-Gon, who had been killed by Maul, as well as the subsequent victory parade to show the newfound alliance between the Naboo and Gungans as Queen Amidala presents a gift to Boss Nass.

Sometime after the events of The Phantom Menace, Jar Jar moves to Coruscant to become a Senior Representatives for his people in the Galactic Senate, serving under Padmé. He temporarily takes her place as senator when she goes into hiding after an assassination attempt on her life.

Jar Jar was manipulated by Supreme Chancellor Palpatine into proposing that the Senate grant the Chancellor emergency powers that would allow him to create an army to combat the Separatists. This lead to the creation of the army deployed by the Republic during the Clone Wars and would eventually allow Palpatine to gain complete control of the Senate.

Jar Jar was present when Palpatine was brought back from the Battle of Coruscant, and was among the Senators who welcomed him back. He is seen again when Palpatine officially transforms the Republic into the Empire, thus changing the Galactic Senate into the Imperial Senate.

He is last seen attending Padmé's funeral on Naboo after her death on Polis Massa, following the cart alongside Boss Nass, both carrying heavy hearts at losing a good friend in the former Queen and Senator who brought peace between their people.

In the novel Star Wars: Aftermath: Empire's End, occurring between the events of Return of the Jedi and The Force Awakens, it is revealed that because of his involvement with allowing the rise of the Galactic Empire, Jar Jar was once again banished by the other Gungans, this time for good. He then made a living for himself as a clown that performed in the streets of Theed on Naboo. Jar Jar was shunned by the adults of Theed, but did not care, while children enjoyed his presence. Jar Jar eventually adopted a scarred orphan boy named Mapo who was like him, an outcast created by the Galactic Empire's actions. Somewhat notably, Jar Jar's status as a performer who is held in contempt by adults and enjoyed by children is reflective of real-world reception towards the character.

A golden bust of Jar-Jar appears in Dok-Ondar's collection of galactic artifacts.

There are multiple allusions to and appearances of Jar-Jar in this attraction. G2-9T makes reference to him when he tells one of the Star Tours passengers that he looks like Jar Jar followed by impersonating the gungan by saying, "Meesa thinks you must hear that all the time!". G2-9T also mentions Jar-Jar when he sees luggage containing souvenir Goofy hats which the droid misidentifies as being souvenir hats of Jar-Jar Binks.

Jar Jar himself makes two randomized physical appearances in the attraction. In the queue, his silhouette can be seen frozen in carbonite and being transferred through the Star Tours space-port. In the chance Naboo climax, C-3PO will accidentally ram the StarSpeeder 1000 into Jar Jar while passing through the waters of Naboo.

Jar Jar about to get in a fight with Sebulba 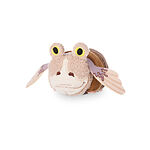 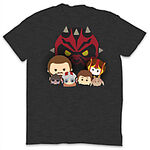 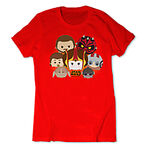 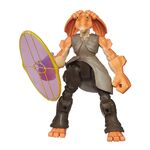 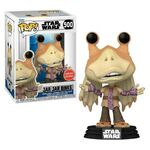