Disney Wiki
Register
Don't have an account?
Sign In
Advertisement
in: Objects, Pirates of the Caribbean objects

Tia Dalma gives Captain Jack Sparrow a jar of dirt so that he will always be near land and safe from Davy Jones. She explained that, as Davy Jones was unable to set foot on land but once every decade, Jack would carry land with him at all times. It appeared in Pirates of the Caribbean: Dead Man's Chest and has appeared in the Disney Gallery at Disneyland.

During his search for the Dead Man's Chest, Jack Sparrow visits the mystic Tia Dalma. To protect him from Davy Jones, she gives Jack a jar of dirt, so that he'll alway be near land—and safety. She explained that, as Davy Jones was unable to set foot on land but once every decade, Jack would carry land with him at all times. Though he didn't want the jar of dirt at first, he became attached to it during his travels, so far as to insist to Pintel and Ragetti, "don't touch my dirt".

After Jack unlocked the chest, he took the heart of Davy Jones and hid it within his jar of dirt. James Norrington, however, discovered this, and took the heart from the jar, leaving nothing but dirt inside. Thus, when Jack confronted Davy Jones and the Flying Dutchman, he erroneously believed he had the advantage over Jones, calling him "fishface" and "a slimy git". He then proceeds to taunt Davy Jones with a little song that confused his crew. However, the jar slipped from Jack's grasp, and shattered on the deck of the Black Pearl, revealing that the jar was only filled with dirt. With his protection gone, Jack suffered capturing and imprisoning in Davy Jones's Locker by the Kraken. However one day after Jack escaped from Davy Jones's Locker and returns in the living world thanks to the help of Will Turner, Elizabeth Swann, Hector Barbossa and Tia Dalma.

The jar of dirt's appearance in the game is slightly different from Pirates of the Caribbean: Dead Man's Chest. In the PlayStation 3 version of the game, Jack Sparrow received the jar from Tia Dalma at Port Royal, while in the PlayStation 2 version the jar first appears sitting beside Jack after the fight for the key.

The Jar of Dirt was put on display at the Disney Gallery in Disneyland. 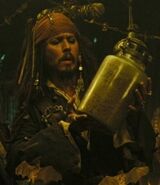