3
Jared Earl Bush is a screenwriter, director, and producer for Walt Disney Animation Studios. He is well known as the co-creator of Penn Zero: Part-Time Hero (along with Sam Levine).

Outside of Disney, Bush is also the founder of the production company Dark Castle Entertainment, which is known for producing drama/thriller films, such as House of Wax. 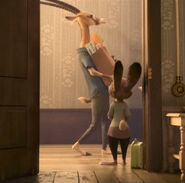 Jared Bush at the premiere of Moana in November 2016.