Marcus Speedstar (brother)
Jarek Yeager is a veteran pilot who appears in the animated series Star Wars Resistance. He was once a pilot who fought in the rebellion against the Empire, and is an old friend of Commander Poe Dameron. Following the Empire's defeat, Yeager retired to run a repair shop on the Colossus refueling station. He enjoys the solitude of being far from the central systems of the galaxy. He is quiet, hardworking, and wise, having experienced much in his lifetime. 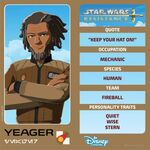