2
Jason Matthew Biggs is an American actor and comedian best known for his role as Jim Levenstein in the American Pie film series. He is also well known for his role in films, such as Loser and Saving Silverman. Additionally, he played Larry Bloom in the Netflix original series Orange Is the New Black.

For Disney, he played Arthur Brickman in the 2004 Miramax Films comedy, Jersey Girl. He also played Charlie Cooper in the 2006 drama film, Eight Below.

Jason Biggs at premiere of Eight Below in February 2006. 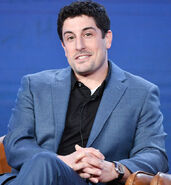 Jason Biggs peaks at Fox's Outmatched panel at the 2020 Winter TCA Tour.
Add a photo to this gallery
Retrieved from "https://disney.fandom.com/wiki/Jason_Biggs?oldid=4055278"
Community content is available under CC-BY-SA unless otherwise noted.