1998-present
Jason Mantzoukas (pronounced "man-zoo-kus") is an American actor, comedian, and screenwriter. He is best known for his roles as Rafi in the FX comedy sitcom The League, Nuclear Nadal in The Dictator, and various roles in other comedy shows.

For Disney, Mantzoukas voiced Hey Nongman in Ralph Breaks the Internet and Steelbeak in the DuckTales reboot. 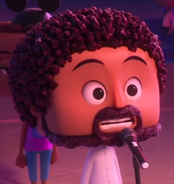 Steelbeak
(DuckTales reboot)
Add a photo to this gallery 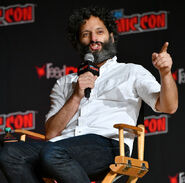 Jason Mantzoukas speaks at the 2019 New York Comic Con.
Add a photo to this gallery
Retrieved from "https://disney.fandom.com/wiki/Jason_Mantzoukas?oldid=4386225"
Community content is available under CC-BY-SA unless otherwise noted.