Disney Wiki
Register
Don't have an account?
Sign In
Advertisement
in: People, Males, The Lion King,
and 43 more

Jason Christopher Marsden is an American actor, voice actor, director, and producer who is largely known for his numerous voice roles in various animated films, video games, and TV series.

His Disney roles include the current voice of Max Goof since 1995, Kovu in The Lion King II: Simba's Pride and The Lion Guard, Mungo in Tarzan franchise, Cavin in Gummi Bears from Seasons 4-6, Tino Tonitini in The Weekenders, Haku in Spirited Away, the announcer of Toon Disney from 2004 to 2007, and various other characters that are listed below.

Michael
(Cartoon All-Stars to the Rescue)

Shnookums the Cat
(The Shnookums and Meat Funny Cartoon Show) 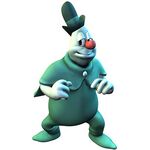 Jason Marsden behind the scenes of The Lion King II: Simba's Pride.