Diana Chan (2008-present)
Jason Scott Lee is an American actor, voice actor, and martial artist. He is best known for his role as Bruce Lee in the 1993 martial arts film, Dragon: The Bruce Lee Story.

His Disney roles include playing Mowgli in Rudyard Kipling's The Jungle Book and voicing David Kawena in Lilo & Stitch and its sequel. He will also play Bori Khan in the 2020 version of Mulan. 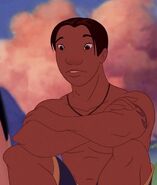 Jason Scott Lee behind the scenes of Lilo & Stitch.
Add a photo to this gallery

Retrieved from "https://disney.fandom.com/wiki/Jason_Scott_Lee?oldid=3963211"
Community content is available under CC-BY-SA unless otherwise noted.