Jason Jordan Segel is an American television and film actor, screenwriter, comedian, composer, puppeteer, musician, and singer who is well known for his role as Marshall Eriksen on the CBS sitcom How I Met Your Mother from 2005 to 2014 and as Nick Andopolis in the short-lived NBC television series, Freaks and Geeks from 1999 to 2000. He also voiced Vector Perkins in Universal/Illumination's Despicable Me.

For Disney, he played Gary in the 2011 feature film, The Muppets. He also guest starred in Take Two with Phineas and Ferb. He also posed as one of The Hitchhiking Ghosts in "Where You Can Go On the Ride of Your Afterlife" in the Disney Dream Portrait Series. 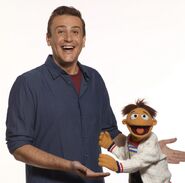 Jason Segel and Amy Adams at premiere of The Muppets in November 2011.

Jason Segel speaks at the Dispatches from Elsewhere panel at the 2020 Winter TCA Tour.
Add a photo to this gallery
Retrieved from "https://disney.fandom.com/wiki/Jason_Segel?oldid=3942980"
Community content is available under CC-BY-SA unless otherwise noted.