Disney Wiki
Register
Don't have an account?
Sign In
Advertisement
in: Characters, Sofia the First characters, Males,
and 11 more

Onyx and Opal (parents)
Jasper is a young griffin in Sofia the First that lives in the castle jewel room along with his parents Onyx and Opal.

Jasper loves anything shiny and will take things without hesitation, making him very sneaky and mischievous. However, his infatuation also makes him easily distracted as he will mindlessly go after anything shiny. He also likes to "Go, Go, Go!"

In his debut appearance, after seeing Sofia's Amulet of Avalor, Jasper followed her and stole it after she reluctantly took it off. He then began stealing other shiny objects around the castle, including the Queen's new tiara, until he was spotted by Sofia's animal friends but escaped from them.

Jasper nearly fell into a trap by Cedric the Sorcerer to obtain the amulet by baiting him with a jewel but due to a delay in Cedric's spell casting, Jasper got away with the jewel. Cedric chased after him using a flying contraption until he crashed into the ballroom where Sofia and the guests were. Sofia realized that Jasper was the thief and discovered him under the table hoarding the things he stole and gave back her necklace. Jasper was taken back to the jewel room, where the guards made sure to keep a close eye on him from now on.

At the time of "Minimus is Missing," Jasper had gotten much bigger and more mature. When Minimus and the other flying horses went missing, Jasper and his parents accompanied Sofia, James, and Amber in their search for them. Jasper showed that he gets excited easily and flies head-on into any situation without thinking it through. After saving all the flying horses from Wendell, he was very happy and wanted to go on another adventure. His parents commented that they would never be able to get him back in the jewel room after this.

Jasper snaps the neck of the lute. 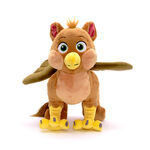 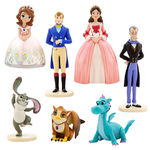