Big on brawn but short on brainpower, the Jaws Theta Chi (JΘX) fraternity brothers are rarely seen without their flashy letterman jackets. The JOX are brutal competitors who never hesitate to do whatever it takes to beat their opponent, even if it's breaking the rules. Despite practically living at the gym or on the field, these sports-loving monsters often prove that bigger doesn't always mean better when it comes to Scaring.

JOX was one of the fraternities competing in the Scare Games. During the first event, JOX succeeds the obstacle course, but would subsequently be disqualified after it is discovered the members were cheating by wearing a special protection gel that prevents allergic reactions to the obstacles, allowing Oozma Kappa to take their place in the competition. 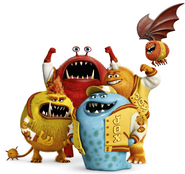