2
Jon Ferguson Cox "Jay" Mohr is an American actor, voice actor, stand-up comedian, and radio host. He is known for his role as Professor Rick Payne in the TV series Ghost Whisperer, the title role in the CBS sitcom Gary Unmarried, which ran from 2008 to 2010, as a featured cast member for two seasons on the sketch comedy show Saturday Night Live, and the back-stabbing sports agent Bob Sugar in Jerry Maguire. As of January 2013, he is the host of Jay Mohr Sports, a daily midday sports radio talk show on Fox Sports Radio.

For Disney, he voiced Mack McCro in The Brave Little Toaster to the Rescue. He also voiced King Groucherooney and Suave Seashell in The 7D. He even played Alan in the ABC TV show, American Housewife. 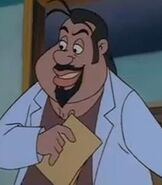 Jay Mohr attending the 15th annual Golden Trailer Awards in May 2014.
Add a photo to this gallery
Retrieved from "https://disney.fandom.com/wiki/Jay_Mohr?oldid=3772086"
Community content is available under CC-BY-SA unless otherwise noted.