The Napoleon of Fur

Arrested
Jean-Pierre Le Pelt is the secondary antagonist in 102 Dalmatians. He is a furrier and, just like Cruella, is the head of his own fashion house called Monsieur Le Pelt.

After reverting to her original self, Cruella seeks out Le Pelt at his fur fashion show to suggest an alliance between the two of them, to create her the Dalmatian puppy coat she failed to get at the end of the first film. Le Pelt agrees to this and returns to her house with her. He immediately takes a dislike to her butler Alonzo, referring to him as "a wormy little man." Le Pelt is horrified when Cruella modifies her drawing of the puppy coat, replacing the hair with a hood "for three special puppies." He is also shocked when he finds out Cruella is stealing the puppies, for which Cruella laughed at him. When he voices his feelings to Cruella about Alonzo's uselessness, she gives him the job of stealing the last three puppies - Dipstick's puppies. Despite his reservations, Le Pelt is determined to prove that he is better than Alonzo, and so he heads off to steal them while Dipstick and his owner Chloe are at a party Cruella is hosting.

Eventually, after falling face down in a toilet and being bitten on the butt by Dottie, Le Pelt manages to capture the puppies and Dottie; although he drops his ticket for the Orient Express, the vital clue that allows Chloe and Kevin Shepherd (the owner of a local dog shelter) to track him and Cruella to his sweatshop behind a Parisian bakery. After trapping Chloe and Kevin in the basement with the Dalmatian puppies, Le Pelt begins to prepare for the strangling and skinning process. When the puppies began to escape, led by Oddball (whom Alonzo had supposedly killed), Cruella heads out after them. Le Pelt laughs at Alonzo again, causing a fight to start between the two of them. Eventually, Le Pelt is defeated when Alonzo wraps him inside one of his fur coats, which is then sewn up by one of his illegal immigrant workers (much like a straitjacket), although he manages to knock Alonzo to the floor. As he goes to crush him, Le Pelt steps in the hole through which the puppies had escaped, trapping him whilst being bitten on the leg by a dog named Chomp and gagged with a fur tail scarf by Alonzo until the police arrive to arrest him and Cruella.

In 102 Dalmatians: Puppies to the Rescue, Le Pelt had a much smaller role, being, along with Jasper and Horace, one of Cruella's henchmen that the player – controlling Oddball or Domino – had to trap.

At the end of the game, the three henchmen hid in crates to escape when the police raided Cruella's toy factory, though they ended up being shipped to an isolated desert island.

Was created solely for 102 Dalmatians and has no animated counterpart.

Le Pelt in 102 Dalmatians: Puppies to the Rescue.

A trapped Le Pelt being bitten on the leg by Chomp. 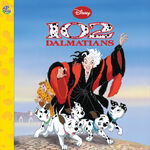