1977-present
Jeannie Elias is a Canadian-American voice actress, who is best known for her roles as Beth Oblong, Creepy Susie, and Mikey Butts in The Oblongs, Carl Floutley in As Told by Ginger, and Princess Toadstool, Birdo, and Shy Guy in The Super Mario Bros. Super Show!.

Her Disney roles include Roo (Winnie the Pooh in the Hundred Acre Wood), Max Goof in The Spirit of Mickey, Huey Duck in Quack Pack, Clyde in Jungle Cubs, Strange and Herb Elephant in Whispers: An Elephant's Tale, and additional voices in The Wild. 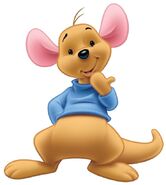 Roo
(Winnie the Pooh in the Hundred Acre Wood)

Max Goof
(The Spirit of Mickey)
Add a photo to this gallery
Retrieved from "https://disney.fandom.com/wiki/Jeannie_Elias?oldid=4202059"
Community content is available under CC-BY-SA unless otherwise noted.