The Rebels have determined where the Empire is keeping Hera. She is being held at the Imperial Complex in Capital City, where she is currently being interrogated by Governor Pryce for information on where the Rebel's secret base is. Knowing the complex will be heavily guarded and will shoot down any vessel on sight, the Rebels build themselves some gliders they can use to fly to the complex unnoticed. Ezra and Sabine disguise themselves as TIE Pilots, and Kanan gives himself a haircut and a shave. Ready to go, Zeb gets them airborne, and the three Rebels fly to Capital City.

Meanwhile, Thrawn fears that his TIE Defender project is at risk, because Director Krennic has been persuasive in diverting the funding to his own project, "Stardust". In the hopes of continuing construction of the TIE Defender, Thrawn leaves for Coruscant to take this case directly to the Emperor himself. By evening, the Rebels reach the Imperial Complex unnoticed. Ezra and Sabine go off to find some better transportation when they make their escape. Kanan climbs down to Governor Pryce's office, and finds Hera, still being interrogated. Once Pryce was called out of the room, Kanan came to Hera's rescue. They escaped to where they landed the gliders, but Rukh comes after them. Kanan loses his Lightsaber in a fight, but manages to Force push him away. Stormtroopers from above open fire, and Hera and Kanan escape on one of the gliders.

They fly to the Lothal City fuel depot, and climb to the top of one of the fuel tanks for a pick up by Ezra and Sabine. While they wait, Hera confesses her love for Kanan, and the two of them share a kiss as Ezra and Sabine fly in with a patrol ship. However, as they make their escape, Pryce gives orders to shoot the fuel tanks. Kanan uses the force to hold back the explosion to give the others time to escape. Hera refuses to leave him, but Kanan forces them to go. As his sight returns and looks at Hera for the last time, he force pushes his fellow Rebels to safety as he is consumed in the explosion. 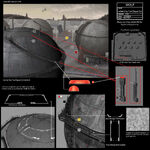 Kanan perishes in the explosion