Destroyed and converted into the Imperial Palace

The Coruscant Jedi Temple, simply known as the Jedi Temple, was the headquarters of the Jedi Order from the conclusion of the Great Sith War to the Jedi Purge, and during that time was home to it's major training, bureaucratic, and dormitory facilities; it is located on the planet Coruscant. Jointly operated by the Jedi Order, and the Galactic Republic, the temple was sealed to all but the Jedi, and their allies; with very few public areas.

The Coruscant Jedi Temple was originally built over an ancient Sith shrine in the hopes of sealing away the traces of the dark side of the force that emanated from the site, as well as taking advantage of the wellspring of force energy that emanated from the area. However, overtime, as the dark side of the force grew stronger, the evil aura of the Sith shrine seeped up into the temple, making it more difficult for the Jedi to foresee the future, and weakening them; this proved to be a sign of the Jedi's arrogance.

The complex would be abandoned and largely destroyed at the time of the Declaration of a New Order when the Order by the Galactic Empire. When he became emperor, Palpatine converted the Coruscant Jedi Temple into his own personal palace. The building was rebuilt into an amalgam of dark colored, blockish edifices with sloping facades, with only the old spires rendered unaltered.

After the downfall of the Galactic Empire, and the death of Palpatine respectively; it is unknown what became of the Coruscant Jedi Temple.

The headquarters of the Jedi Order 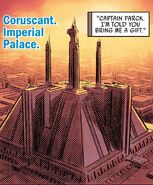