The Jedi Temple Guards are part of the Temple Security Force, a force of Jedi that scrubbed away their past identities and devoted their whole lives to protect the Coruscant Jedi Temple and the Jedi Order in Star Wars: The Clone Wars. They later also appeared in Star Wars Rebels in the episode "Shroud of Darkness".

These Jedi are led by Jedi Battlemaster Cin Drallig. Most of them were wiped out by Darth Vader and the 501st Legion while protecting the Coruscant Jedi Temple during Order 66, only a few managed to escape and the identities of these few survivors are unknown. However, one of the most famous examples of a Jedi Temple Guard is The Grand Inquisitor.

A Jedi Temple Guard would disappear inside the formal robes and identity-concealing masks, the ultimate expression of emotional detachment required in service to a higher calling. Jedi Temple Guards carried imposing lightsaber pikes, which were thick, double-bladed weapons that produced a rare and distinctive yellow blade. 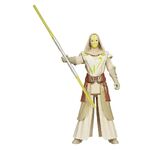 Kanan battling the Grand Inquisitor as a Temple Guard.