Jedi Training: Trials of the Temple (previously known as Jedi Training Academy) is a guest experience based on the Jedi teachings found in the Star Wars series, located at next to Star Tours: The Adventures Continue in the Echo Lake area at Disney's Hollywood Studios, at the Tomorrowland Terrace in Disneyland, inside Videopolis Theater in Discoveryland at Disneyland Park (Paris)[8] and at the original UFO Zone area at Hong Kong Disneyland.

In the original version, sixteen or more children sign up for each session at the beginning of the day to be Jedi Younglings and participate in a training session by the Jedi Master. They are provided training Lightsabers and Jedi robes. As the master completes the instruction of a simple combination of lightsaber attacks to the children, Darth Vader, Darth Maul, and two stormtroopers appear. Each Jedi trainee can choose face off with either Maul or Vader until everyone has got to fight a villain, which is when the villains retreat to the stage, outnumbered (the trainees on the stage fought Vader, while those on the ground fought Maul).

After Vader and Maul leave through a door on stage (in Disneyland, the stage rises and lowers Maul and Vader instead of them going through a door), the stormtroopers try to flee as well, but the door is closed because Vader and Maul left a little before they tried to flee, and the master uses the Force to open the door to let the stormtroopers leave. The children, now Padawans, are congratulated on their mastering of the Force by Yoda, then return the training lightsabers and robe, and are given a diploma for their participation.[5][4]

Jedi Training Academy originally was a part of Star Wars Weekends and only took place during it.[5] While it is now being featured daily throughout the year, it was especially popular during Star Wars Weekends. 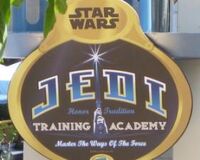 Card for completing the experience at the then Disney's MGM Studios