F.O.W.L.
Jeeves (in the original Italian Lusky) is John D. Rockerduck's secretary. Rockerduck depends greatly on him, much in the same way as Scrooge McDuck depends on his butler Albert. Unlike Scrooge, Rockerduck has rarely been shown to have any family, so when Rockerduck goes on an adventure, Jeeves fills the role of a supporting adventurer, which would be served by Donald Duck in Scrooge's case.

This version of Jeeves has little in common with the original, save for having been the head henchman of John D. Rockerduck at one point namely, in his case, at the end of the 19th century, when Rockerduck was making his fortune peddling his lies and treachery through the Old West. A huge, burly bodyguard type with metal-plated teeth resembling the James Bond villain Jaws, Jeeves bore no great loyalty to Rockerduck, whom Scrooge McDuck convinced him to betray by stressing the fact that Rockerduck was denying him any share of the gold he'd plundered, just like the miners of Gumption.

In the present, Jeeves is a member of F.O.W.L., where he has been artificially reconstructed into "FrankenJeeves" so he can continue acting as Rockerduck's caretaker and bodyguard. In The Forbidden Fountain of the Foreverglades!, he is turned into a baby.

In "The Last Adventure!", Rockerduck used water from the Fountain of the Foreverglades to age FrankenJeeves back to normal so he can fight Scrooge, Donald, and Della after the trio dealt with the Eggheads.

Jeeves is usually drawn to appear slightly younger than Albert, with short black hair. Like Albert, Jeeves takes great pride in being a dedicated helper of his boss, but he will sometimes resort to criminal activity if pressed to by his master. Rockerduck and Jeeves have worn different disguises to trick Scrooge in some Italian stories. Jeeves has been shown confiding with Albert, without the consent or knowledge of either of their respective bosses. He's also seen as being friendly towards Donald and, occasionally, Fethry, only antagonizing them when pressed by his duty towards his boss. 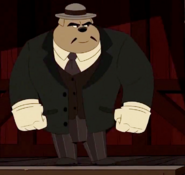