Django and Jenny
Jeffrey “Jeff/Swampy” Marsh is a director, writer, producer, animator, and voice actor. Co-Creator of Phineas and Ferb and it's sequel show, Milo Murphy's Law, with Dan Povenmire, he has directed, written, and acted in this Disney Channel Original Series. In Phineas and Ferb, he portrays the voice of Francis Monogram, the commander of Perry the Platypus. In Milo Murphy's Law he voices the time traveler, Balthazar Cavendish. From the both show’s inception, Swampy has been one of the main songwriters of both series, along with Dan Povenmire and Martin Olson. Before working for Disney, he was one of the writers of the Nickelodeon program Rocko’s Modern Life. 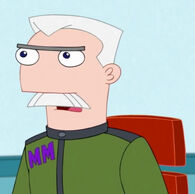 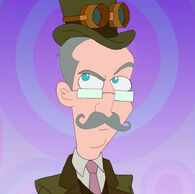 Swampy with Dan and Vincent Martella at D23 2019

Retrieved from "https://disney.fandom.com/wiki/Jeff_%22Swampy%22_Marsh?oldid=3859891"
Community content is available under CC-BY-SA unless otherwise noted.