Jeffrey Glenn "Jeff" Bennett is an American voice actor and singer who is best known for his many voice roles, including Petrie in The Land Before Time franchise, Blitz in Road Rovers, Clay Bailey in the Kids' WB series Xiaolin Showdown, Peter Puppy in Earthworm Jim, the Man in the Yellow Hat in the sequel films to Curious George and television series of the same name, Dexter's dad from Dexter's Laboratory, several characters from The Powerpuff Girls, and Kowalski in the Nickelodeon series The Penguins of Madagascar instead of Chris Miller. He is also well-known for voicing the titular character in the animated sequel film, Kangaroo Jack: G'Day U.S.A.! and the title character in Cartoon Network's Johnny Bravo.

For Disney, Bennett provided the singing voice of Mr. Centipede in James and the Giant Peach. He also voiced Mr. Smee since Return to Neverland, Tramp, Trusty, Jock, and the Dogcatcher in Lady and the Tramp II: Scamp's Adventure, Jitters A. Dog in Raw Toonage and Bonkers, King Hubert, Lord Duke, and the Sultan in Disney Princess Enchanted Tales: Follow Your Dreams, Jasper in 101 Dalmatians II: Patch's London Adventure, Amos Slade in The Fox and the Hound 2, Duke L'Orange in the Mighty Ducks TV series, Dr. Hämsterviel in the Lilo & Stitch franchise, and Mayor Turkey Lurkey in Chicken Little: The Video Game, replacing Don Knotts in the process as he did not reprise his role.

Bennett provided the vocal effects for all of the Rescue Rangers in the DuckTales episode, "Double-O-Duck in You Only Crash Twice!", as well as voicing King Honestus in "The Lost Harp of Mervana!". He also voiced Ben Baxter and The Talking Zebra in Phineas and Ferb.

He will voice an unspecified role in X-Men '97

Amos Slade
(The Fox and the Hound 2) 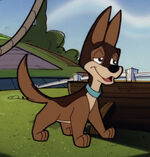 Dennis the Duck
(House of Mouse)

Dewey
(Secret of the Wings)

Dipstick
(102 Dalmatians: Puppies to the Rescue)

Gemini
(Star vs. the Forces of Evil)

Trusty and Jock
(Lady and the Tramp II: Scamp's Adventure)

Justin Armberg
(Star vs. the Forces of Evil)

King Shastacan
(Star vs. the Forces of Evil)

Lobster Claws
(Star vs. the Forces of Evil) 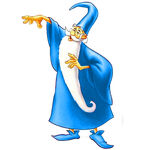 Mortimer Mouse
(Mickey's Once Upon a Christmas and A Pete Scorned)

Principal Peststrip
(The Buzz on Maggie)

Principal Skeeves
(Star vs. the Forces of Evil)

Robert Canler
(The Legend of Tarzan) 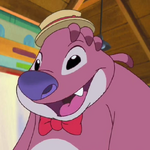 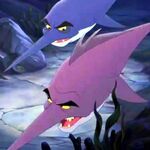 The Dogcatcher
(Lady and the Tramp II: Scamp's Adventure)

The Turkey
(Mickey Mouse Works and House of Mouse)

Wraith
(Guardians of the Galaxy)

Jeff Bennett attending the premiere of Enchanted in November 2007.

Jeff Bennett and Frank Welker in the press room at the 2016 Creative Arts Emmy Awards.