Flight of the Navigator

"That dumb dog will never learn to catch a frisbee." (8 years)

Jeff Freeman is Bill and Helen's younger son and David's brother in Flight of the Navigator.

Jeff was a cheeky boy who enjoyed tormenting David, causing a few heated arguments to which their parents were always caught in the middle.

At the age of 8, Jeff was the average cheeky annoying boy who enjoyed teasing David, but after David's mysterious disappearance for 8 years, Jeff showed how much he really cared about him by helping in his parents' search to find him, feeling bad that the last time they met was when he scared him by jumping out of a tree when he came to look for him. When he meets him again, he is just as surprised to see him as he is by him and helps him understand where he is and what has changed. He goes to great lengths to help him out including lighting a fireworks display so David can find his way home. When David returns to 1978, he is amazed when David forgives him for his teasing and eventually warms up to him. 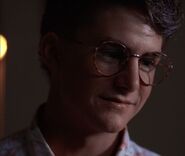 Jeff at 16 years
Add a photo to this gallery

Retrieved from "https://disney.fandom.com/wiki/Jeff_Freeman?oldid=3887264"
Community content is available under CC-BY-SA unless otherwise noted.