James, Duke, and Lucy
Jeffrey Todd "Jeff" Garlin is an American stand-up comedian, actor, producer, voice artist, director, screenwriter, and author, who is best known for his roles as Phil Ryerson in the 2003 Revolution Studios comedy film, Daddy Day Care, Jeff Greene on the HBO sitcom Curb Your Enthusiasm (which he also produced), and Murray Goldberg on the ABC sitcom The Goldbergs.

For Disney, he played Kelbo Russo in the Disney Channel original series Wizards of Waverly Place, and voiced Captain B. McCrea in the 2008 Pixar film, WALL-E, Buttercup in the 2010 Pixar film, Toy Story 3, the Toy Story Toons shorts, and the 2019 Pixar film, Toy Story 4, and Otis in the 2011 Pixar film, Cars 2. He also had a minor role in The Love Bug as a highway patrolman, who arrests Simon Moore III and his partner near the film's end. He also played Agent Reese in the 1995 version of The Computer Wore Tennis Shoes. 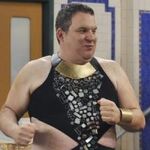 Jeff Garlin behind the scenes of WALL-E.

Jeff Garlin at premiere of WALL-E in June 2008.

Jeff Garlin behind the scenes of Toy Story 3.

Jeff Garlin speaks at The Goldbergs panel at the 2015 Summer TCA Tour.

Jeff Garlin visits The Late Show with Stephen Colbert in May 2016.