1993–present
Jeffrey David "Jeff" Nathanson is an American screenwriter, director, and producer. He is known for writing screenplays to films such as Catch Me if You Can, the Rush Hour film trilogy, The Terminal, and Tower Heist. 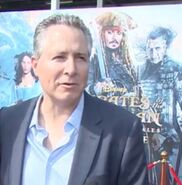 Jeff Nathanson at the premiere of Pirates of the Caribbean: Dead Men Tell No Tales in May 2017.

Jeff Nathanson at the premiere of The Lion King remake in July 2019.
Add a photo to this gallery

Retrieved from "https://disney.fandom.com/wiki/Jeff_Nathanson?oldid=4384996"
Community content is available under CC-BY-SA unless otherwise noted.