2
Jeffrey Wright is an American actor and voice actor. He is probably best known for his role as Beetee Latier in The Hunger Games film series. He also played Valentin Narcisse in the HBO series Boardwalk Empire.

For Disney, he voiced Poppa Henry in the 2015 Disney/Pixar film, The Good Dinosaur, and is set to voice Uatu the Watcher in Marvel's What If...?. 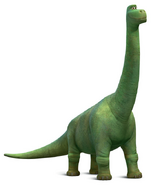 Poppa Henry
(The Good Dinosaur)
Add a photo to this gallery

Jeffrey Wright behind the scenes of The Good Dinosaur.

Jeffrey Wright at premiere of The Good Dinosaur in November 2015. 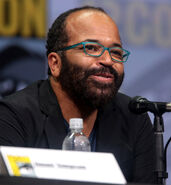 Jeffrey Wright and his daughter, Juno attending the 70th annual Emmy Awards in September 2018.
Add a photo to this gallery
Retrieved from "https://disney.fandom.com/wiki/Jeffrey_Wright?oldid=4192510"
Community content is available under CC-BY-SA unless otherwise noted.