Sophocles Iraia
Jemaine Atea Mahana Clement is a New Zealand actor, musician, comedian, singer, director, and writer. He is well-known as one half of the musical comedy duo Flight of the Conchords along with Bret McKenzie, and for portraying Boris the Animal in Men in Black 3 and voicing Nigel the cockatoo in the Blue Sky's Rio films.

For Disney, he portrayed the Prison King in Muppets Most Wanted, and voiced Fleshlumpeater in The BFG. He currently voices Dr. Zone in Milo Murphy's Law and voiced Tamatoa in the 2016 animated film, Moana.

The Prison King
(Muppets Most Wanted) 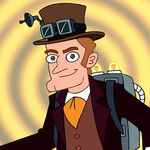 Jemaine Clement at premiere of The BFG in June 2016.

Jemaine Clement behind the scenes of Moana.

Jemaine Clement speaks at the Legion panel at the FX portion of the 2018 Winter TCA Tour.

Jemaine Clement speaks at the What We Do in the Shadows panel at the 2020 Winter TCA Tour.
Add a photo to this gallery
Retrieved from "https://disney.fandom.com/wiki/Jemaine_Clement?oldid=4166541"
Community content is available under CC-BY-SA unless otherwise noted.