"A bunch of us are having a party this weekend. Ninth graders only. Except for you, Max."
"What took you so long?"
Jenna is a character in Max Keeble's Big Move. She is one of the people on Max's newspaper delivery route and his initial crush. She is taller and older than him.

Initially, Jenna is kind and seductive to Max. However, she has selfish and shallow toward Megan.

Later in the film, Jenna tells Chelsea she only viewed Max as her paperboy and never really liked him.

Jenna's first on-screen appearance is shortly after Max's life science class is dismissed for the day. He is knocked down by being hit by the door while mesmerized with her beauty, and she then asks if he is okay. She does not initially remember who he is until he tells her that she is on his newspaper delivery route. After some exchanges, they part ways, with him claiming that he plays the bassoon in response to learning that she plays the clarinet (specifically the first chair), though he leaves out that he does not actually bring the bassoon specifically because he wants to be cool. When band class comes around, Jenna and Megan met, to which the meeting is sour due to Jenna telling Megan to get off of her chair.

Later on, Jenna invites Max to a milkshake party at Buddy's, when he is trying to get to his friend's house for a going-away party in his honor (he is moving to Chicago). He says no at first, saying he has to go there, but she starts flirting with him, eventually bending down to him and saying, "one milkshake". He ultimately accepts that. While walking, she puts her arm around him. At the party, however, it ultimately turns out to be more than one milkshake, and he tells her and her friends that Chad (the animal that pounced on Principal Elliot T. Jindrake after he tried to halt a food fight and humiliated him in front of the superintendent) is actually a chimpanzee and not a monkey and mentions that he has "phatitude." Later on, as it becomes a night out at the party Jenna and Max start dancing together on top of one of the diner tables to the music, and they continue to have a great time until Max notices his best friends, Megan and Robe, who've been waiting on him for their party see that he's carelessly ditched them for the cool kids. As Max notices Megan starting to sadly walk away (out of jealousy and sadness that Max likes Jenna, regardless of how selfish and rude she is to her) runs of the diner after her leaving Jenna by herself in disbelief as to why he left. Moments later, after Max is left alone, he looks back inside to notice Jenna dancing with Lil' Romeo as his replacement and walks home.

The next day, after Principal Jindrake makes his announcement to disband art, music, P.E., and pretty much everything fun as a result of Max's hijinx. After hearing him complains how her "boyfriend" got them into trouble, Jenna, clearly annoyed by this, denies ever liking him, claiming she has only ever viewed him as a paperboy (to protect popularity and reputation from being ruined) and nothing more.

After the students manage to get rid of the bullies, Jenna happily approaches Max (seeing this as an opportunity to boost her popularity and reputation with the cool kids), offering him an invite to come to a party that her friends are having (rudely noting to Megan that it is only for ninth graders besides him), however, Max finally notices her shallow nature of his crush after seeing how to mean she is to Megan and respectfully turns down her offer stating he is meeting somebody (hinting at Megan, who notices this) and Megan tells her to go with the same gesture that she used against her earlier. Jenna carelessly walks off with her friend, saying, "Whatever!".

Jenna in Max's dream at the start of the film 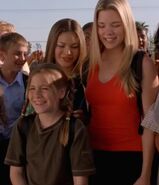 Add a photo to this gallery
Retrieved from "https://disney.fandom.com/wiki/Jenna?oldid=4067907"
Community content is available under CC-BY-SA unless otherwise noted.