Disney Wiki
Register
Don't have an account?
Sign In
Advertisement
in: People, Stuck in the Middle, 2000s births,
and 15 more
English

Jenna Marie Ortega is an American actress and voice actress. She got her early start for playing young Jane Gloriana Villanueva in the CW series Jane the Virgin and Darcy in the 2015 Netflix film, Richie Rich.

For Disney, she portrayed Harley Diaz in Stuck in the Middle and voiced Princess Isabel in Elena of Avalor. She also played the Vice President's Daughter in Iron Man 3 and Darcy in Netflix's Richie Rich. She currently plays Izzy in Bizaardvark and voices Gabriella Espinosa in Big City Greens. 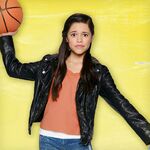 Harley Diaz
(Stuck in the Middle)

Jenna Ortega behind the scenes of Elena of Avalor.

Jenna Ortega holding an Isabel doll at the Disney Store in Chicago in June 2016.

Jenna Ortega at premiere of Star Wars: The Last Jedi premiere in December 2017.