Stella
Jennifer Grey is an American actress, who is best known for her roles as Jeanie Bueller in the 1986 comedy Ferris Bueller's Day Off and Frances "Baby" Houseman in the 1987 romance Dirty Dancing.

For Disney, she voiced Dr. Gevaarlijk, Louisa Patel, and the Librarian in Phineas and Ferb and Mrs. Kurokawa in the Disney dub of The Wind Rises. She also played Janice Geurrero in the 2000 Miramax film, Bounce. In addition, she played Carol Dickinson on Grey's Anatomy.

She is the daughter of Joel Grey. 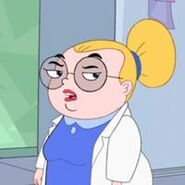 Jennifer speaks at the Red Oaks panel during the 2016 Summer TCA Press Tour.
Community content is available under CC-BY-SA unless otherwise noted.
Advertisement