Rohmer Emmanuel
Jennifer Jason Leigh is an American actress known for playing Hedra 'Hedy' Carlson/Ellen Besch in Single White Female, which earned her the 1993 MTV Movie Award for Best Villain. She is also the daughter of Vic Morrow.

For Disney, she did the voice of Tempest in 4 episodes of Hercules: The Animated Series. She also played Catherine Sloper in Washington Square, Kara Clarke-Murphy in Revenge, Heather in The Young Runaways, and Caroline Cook in the 1997 Touchstone Pictures film, A Thousand Acres. 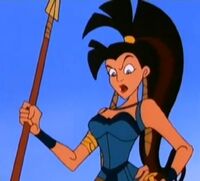 Tempest
(Hercules: The Animated Series)
Add a photo to this gallery

Jennifer Jason Leigh speaks at the Patrick Melrose panel at the 2018 Winter TCA Tour.
Add a photo to this gallery
Retrieved from "https://disney.fandom.com/wiki/Jennifer_Jason_Leigh?oldid=3929549"
Community content is available under CC-BY-SA unless otherwise noted.