1994-present
Jennifer Marie Morrison is an American actress, model, and film producer. She is best known for her role as Dr. Allison Cameron in the Fox medical drama series House from 2004 to 2012. She also had a recurring role as Zoey Pierson in the CBS sitcom How I Met Your Mother.

For Disney, she portrayed the role of Emma Swan in the ABC fantasy-drama series Once Upon a Time.

Emma Swan
(Once Upon a Time)

Jennifer Morrison with Edward Kitsis and Adam Horowitz at promoting the Once Upon a Time panel at the 2011 Summer TCA Tour. 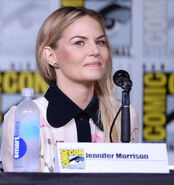