Disney Wiki
Register
Don't have an account?
Sign In
Advertisement
in: The Replacements characters, Disney characters, Females,
and 15 more

Jennifer and Claudia are two beautiful blonde twin girls on The Replacements. They are normally seen with Sierra McCool. The girls make their first (non-speaking) appearance in "The Jerky Girls" and their last appearance in "R2: A Tale of Two Rileys".

Jennifer has wavy hair in a ponytail. She wears pink hoop earrings, a periwinkle dress, and purple shoes. Starting with season 2, she wears a purple belt and stud earrings. Claudia has shorter hair than Jennifer. She wears an aqua green dress with a pink flower in the center, and blue shoes.

The girls in jackets

The girls in carnival outfits

Jennifer and Claudia with Sierra in "The Truth Hurts"

The girls dressed as Riley

Jennifer and Sierra gossiping about Riley and Tasumi

The girls in "Best Friends ForNever?"

The girls ridiculing Riley and Shelton in "The Frog Prince"

Claudia fawning over Shelton (without his glasses) 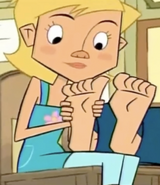 Claudia showing her skill as a foot massager