Spending time with her family, purple shells, her family

Jenny is half-circle shaped with dark magenta eyes and longer, brighter dorsal fins than her daughter, Dory. Her eyelids are slightly darker, and like her daughter and husband has slightly bucked flat teeth.

Even though she was not introduced yet, she is mentioned by Dory in Finding Nemo when Dory tells Marlin about having short-term memory loss.

Jenny is first shown in several flashbacks throughout the movie, starting with a flashback of her and her husband trying to teach Dory how to play hide and seek before stopping her from swimming into the undertow after being distracted by a group of young fish. She gives a small look of worrisome when Dory forgets the rhyme her parents taught her about the undertow before instantly comforting her daughter and acting like nothing is wrong. When Dory heartbreakingly asks if her mother and father will forget her if she forgets them, she embraces her daughter with her husband, both promising to never forget her.

In the second flashback, she praises her young daughter as she finds another shell to add to the shell path that leads to their home. When Dory happily tells her parents that she likes shells, Jenny smiles at her lovingly and asks her to find another shell, hinting that the purple ones are her favorite.

In the third flashback, she comforts her daughter when Dory is too little to lift a shell out of the sand, telling her that life isn't always easy, and then acting shocked as Charlie tells their daughter to give up if life gets too hard, before lovingly chuckling with affection as Charlie explains he was joking and then watches with happiness as Charlie places Dory in the shell and pulls her to the house.

In the fourth flashback, she expresses an ultimate concern as Dory nearly runs into a sunfish, watching Charlie catch her. After Dory apologizes for not remembering right, Jenny comforts her baby and tells her that she just needs to keep swimming. And to help her remember, she begins to sing it into a song softly, twirling around and convincing her husband to join in as they swim around their daughter singing.

In the fifth and longest flashback, Jenny appears as a ghost flashback four times. The first is as she watches Charlie place yet another shell down to make the path, explaining to Dory that she will follow the shell path back home if she ever gets lost. The second and shortest one is as Dory happily exclaims she lives in the coral home as they follow the shells back home. The third is as she and Charlie try to teach Dory how to play hide and seek. The fourth is as she watches her daughter speak whale to the tiny pipe above their home, talking to Destiny. Then the actual flashback begins as she is in their coral home, crying to Charlie about how she's scared about what will happen to their daughter as she can't remember anything, and expresses her worries about when she'll be by herself as an adult. Charlie comforts her, both not knowing Dory has seen everything. She is then seen swimming out with her husband, calling her daughter's name, and then swimming to her as she spots her daughter trying to lift a shell that's dangerously close to the undertow, but not making it in time as her daughter calls for her as she is taken away by the current and sucked into the pipe that leads to the ocean. Jenny cries out for Dory with Charlie.

She is finally seen in the movie without being a flashback as she is returning home with her husband to the Old Tire, carrying several small shells. Upon seeing her daughter, she and her husband freeze up together before dropping the shells and swimming as fast as they can to her, both embracing their daughter. She weeps with joy as she tells Dory how much she's grown, how much she's missed her, and how happy she is to see her. She refuses to let Dory apologize, holding her daughter and explaining how they escaped the Institute and started to place down shells for her to follow so she could one day find them. She touches her daughter's face and praises her for remembering before expressing her sorrow as she thinks her little girl has been alone all these years.

She appears again swimming with Dory and Charlie, listening to her daughter explain her adventures. However, she seems very worried once her daughter wants to go after a truck, trying to get her to see reason. When Dory is about to get flipped up to the traffic, Jenny begs her daughter not to go, terrified of losing her again before finally letting her go.

She is last seen playing hide and seek with her daughter, husband, and friends before swimming with her husband to their new home, making Dory promise to swim with them later. She appears a final time in the last flashback. She praises Dory proudly and happily as she has followed the shells back to their coral home. She allows her to play with the other children and smiles proudly by her husband's side as Dory swims to them, happily giggling.

Dory is Jenny's only child and daughter. When Dory was a baby, Jenny was always by her daughter's side, comforting her, willing her to remember, and showed the utmost care and love for her daughter, even crying to her husband about how concerned for her daughter's future she was as an adult on her own. She was a caring, patient, protective mother to her young baby. So when Dory was sucked away by the current into the pipes, Jenny instantly went with her husband to look for her, and when they couldn't find her, she and her husband set up a home in an old tire and laid out hundreds of shells into paths, hoping their sweet baby girl would find them.

When Jenny finally reunited with her daughter many years later, she hugged her tightly, crying and refusing to let her apologize as she told her daughter the story of how badly she and her father wanted to find her. She helps her daughter try to stop the truck but begs her not to go as she's about to get flipped in the air. Dory assures her with love that if she ever forgets them again, she'll know how to find them, and Jenny finally lets her daughter go. When she believes the truck is taking her daughter away forever, she begins to cry until she watches her daughter come back.

By the end, she trusts her daughter and tries to remain close to her, telling her to come home later for a family swim.

Charlie is Jenny's husband. She and Charlie raised Dory together through her baby with love and affection. She has shown to be very in love with him, as she laughs at his jokes and helps him finish his sentences when he can't. He has shown to be very in love with her, comforting her as she cries and joking playfully. The two continue to stay together after losing their daughter and maintain their relationship throughout the years. They are shown to agree almost all the time and share the same protective nature around their daughter and each other.

Although she does not truly know them, she is shown to have a good relationship with them as she hugs both of them tightly and thanks them repeatedly for taking care of her daughter, even joining them for a game of hide and seek in the end. 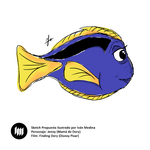 Jenny and Charlie admiring their daughter

Jenny and Charlie smiling their daughter

Jenny smiling at her little girl

"Do you think you could find me another shell?"

"Purple ones are my favorite."

"Oh, Sweetie. Sweetie, you don't need to be sorry."

"My missing girl you're here!"

Jenny trying to comforting her daughter

"We went into quarantine to look for you, but you weren't there."

"And we stayed in this spot for you ever since, We stayed and waited for you."

"You found us. And you know why you found us? Because you remembered."

"You remembered in your own amazing Dory way." 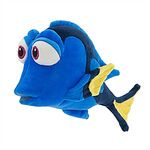