“Well, I fashioned this dove to symbolize my desire for world peace and a true—”
―Jenny[src]

Phineas and Ferb The Movie: Across the 2nd Dimension (cameo)

Long brown hair decorated by a white flower, light skin. She wears a long-sleeve yellow shirt with a yellow and red skirt and yellow socks and red sandals.

"You never told us you have a beach in your backyard!"

Jenny Brown is a recurring character in Phineas and Ferb, and the older sister of Django Brown.[1] With a history of participating in various protests along with an inherent desire for world peace, she can be characterized by her hippie-like nature.

She appears to be somewhat of a hippie, based on her clothing and the Peace symbol she wears, along with her hope and desire for world peace. Jenny says she doesn't like persimmon. She likes pigeons and likes the idea of being Candace's best friend.

Jenny is a somewhat close friend of Candace as well as Stacy, having been seen hanging out with or conversing with them over the phone from time to time. She first appeared in the episode "Lawn Gnome Beach Party of Terror" when she took an interest in Phineas and Ferb's activities when they built an artificial beach in their backyard and came over to spend the day there with Stacy Hirano. She appears to own and care for a dog with a resemblance to a Komondor. She also appears in other episodes helping or hanging with Candace.

Phineas and Ferb The Movie: Across the 2nd Dimension

Jenny plays a role in the film, during the second dimension Doofenshmirtz's invasion when she took control of the Candace Crusher to assist in defense against the attack. 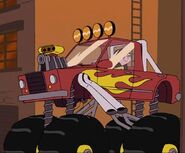 Retrieved from "https://disney.fandom.com/wiki/Jenny_Brown?oldid=3569985"
Community content is available under CC-BY-SA unless otherwise noted.