Finlo Clarkson
Katya Clarkson
Emily Clarkson
Jeremy Charles Robert Clarkson is an English broadcaster, journalist, writer, and talk show host who was best known for co-presenting the BBC motoring magazine show, Top Gear, until his contract with the BBC expired on March 25, 2015, after he verbally and physically attacked a Top Gear producer over a dispute at a hotel while filming on location.

For Disney, he voiced Lightning McQueen's agent, Harv in the UK version of the 2006 Disney/Pixar film, Cars. He also made a guest appearance, alongside his fellow Top Gear co-hosts: Richard Hammond and James May, in the Phineas and Ferb episode "Live and Let Drive". 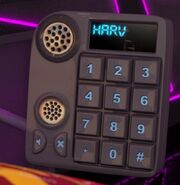 Jeremy Clarkson
(Phineas and Ferb)
Add a photo to this gallery
Retrieved from "https://disney.fandom.com/wiki/Jeremy_Clarkson?oldid=4046665"
Community content is available under CC-BY-SA unless otherwise noted.