To try to stop Heinz-2 from dictatorship

"I've come to rescue you!"
Jeremy Johnson is the 2nd Dimension counterpart of Jeremy Johnson. He is a member of The Resistance against Heinz Doofenshmirtz and the leader of a three-man strike team stationed in the northern side of Danville.

Jeremy has an extended cameo in the movie. He aids Phineas and Ferb in their mission to save a captured Candace and is responsible for breaking down Candace's cell door. He compliments Candace, during which the two exchange romantic glances at each other before getting back to business.

He then appears towards the end of the film, where he shows up in the 2nd Dimension right after Candace-1 reassures Candace, who is now unsure of what to do with her life after Doofenshmirtz is arrested, that there are other pursuits for her to take, to which she replies that she'll "take it under consideration" 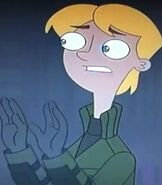 Retrieved from "https://disney.fandom.com/wiki/Jeremy_Johnson_(2nd_Dimension)?oldid=3826564"
Community content is available under CC-BY-SA unless otherwise noted.